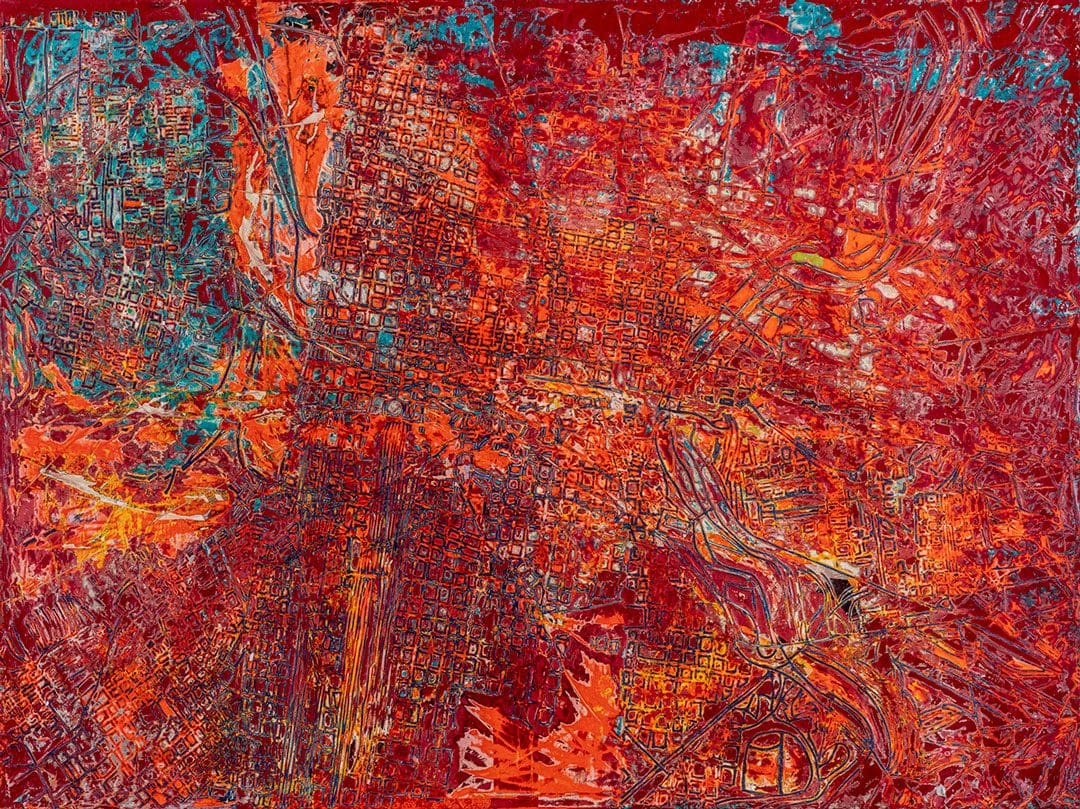 End papers, small rectangular sheets of translucent paper that protect hair during the perm process, are the basis of Los Angeles–based painter Mark Bradford’s early artworks. While working in his mother’s beauty salon, Bradford began integrating the papers into abstract paintings, creating a layered scrim through which the paint emerges. The artist, guided by an interest in common materials, has incorporated items from around Los Angeles—including fragments of posters, broadsides, and billboards—to tackle issues of civil unrest. His painting Kingdom Day (2003), appropriating advertisements and other images, refers to the 1992 edition of the annual Los Angeles parade honoring the birth of Dr. Martin Luther King Jr. In an attempt to help alleviate racial tensions, it recalls the first year a Korean-born parade grand master was appointed, following the fatal 1991 shooting of Black teenager Latasha Harlins by a Korean storeowner and the brutal police beating of Rodney King. A selection of Bradford’s end paper paintings is on view in a solo exhibition spanning two decades at the Modern Art Museum of Fort Worth in Texas through January 10, 2021. In conjunction with the show, Bradford created a billboard installation for the museum’s “Modern Billings” program in downtown Fort Worth. Displayed from early May to mid-July, the project featured three pictures of the late “Mr. LaMarr” from the photo archive of fellow hairdresser Cleo Hill-Jackson. Additionally, an online exhibition of Bradford’s quarantine paintings can currently be seen on the Hauser & Wirth website.

What initially prompted you to incorporate end papers into your abstract paintings?

I love being a painter! I’ve always been fascinated by the history of abstract painting, particularly how it relates to the New York scene in the 1950s.