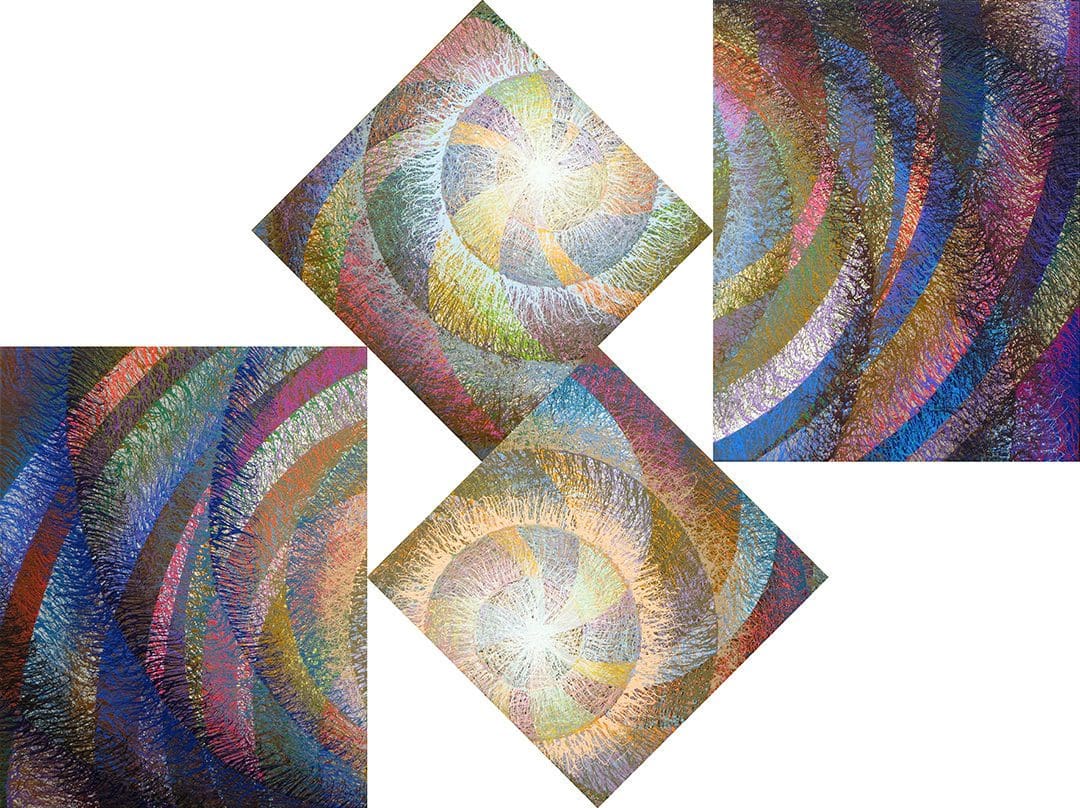 Several years ago I began to sling paint from ultra-fine straight pins, at very high speed, onto canvas. The mark created by doing this just blew me away the first time I made it. Its defining characteristic is electric energy, but the incredibly fine nature of the mark is also striking. It immediately struck me as the perfect visual signifier for string theory. I decided to use the mark in the expression of the ideas I had been dealing with for years.

Beginning around 2006, I used this mark to create images of “the universe of mind and spirit” as I envisioned it, inspired by images of the physical universe produced by the Hubble space telescope. I worked for several years to refine these, especially the spatial aspects, then moved on to a series of radiant “figures” set against a web inspired by the distribution of galaxies and galaxy clusters in the early universe. (A web, I might add, that looks remarkably like the web of neurons in the brain.) All through this period, I wondered about mixing color optically by overlapping the fine skeins produced by this mark and eventually began a series to explore the matter. The “Poles” series began as single panels, but evolved into two panel pieces, then three panel pieces, and ultimately a four panel piece. The series is, on one level, simply an exploration of the colors that can be mixed in this manner. On a deeper level, however, it still deals with the same issues I’ve always dealt with, just in a more abstract idiom.

I am now seventeen paintings into a new series that expands on the look of the diamond-shaped panels in the last eight “Poles” pieces. These new pieces deal with the optical mixing of color exclusively, although they suggest energy condensing into matter to me, as well. Others have suggested they resemble “dreamcatchers”. Ultimately, there will be twenty-four paintings in this series. They are unstretched and have grommets on each corner to attach them to the wall. To me, the magic of a painting is the fact that it’s just a piece of fabric with paint on it, yet it can create such magic. I want that to be more evident in these new pieces, right down to the raw, torn fabric around the outer edges.

The artist doesn’t paint what he sees, he paints what he wants the viewer to see. 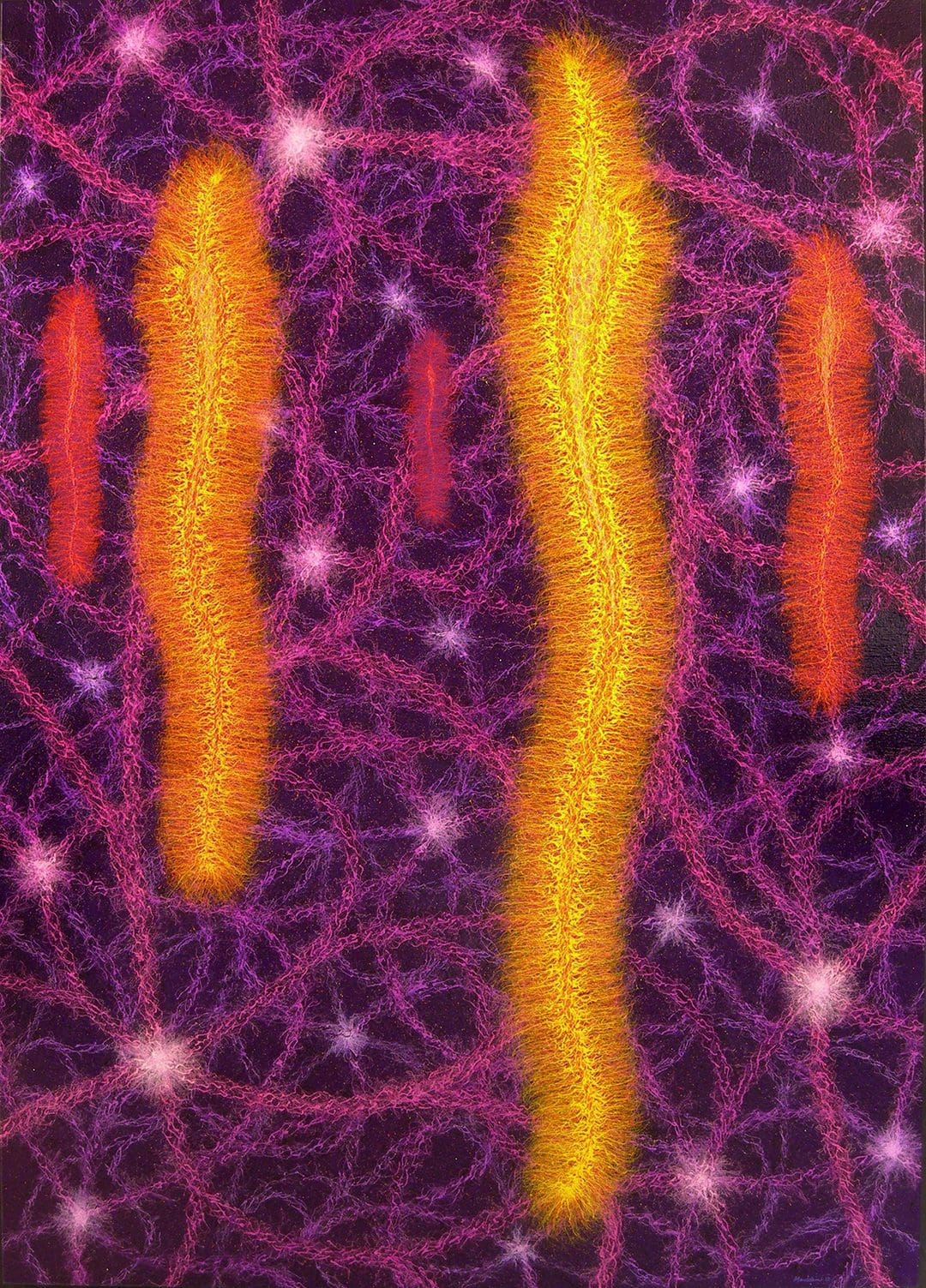 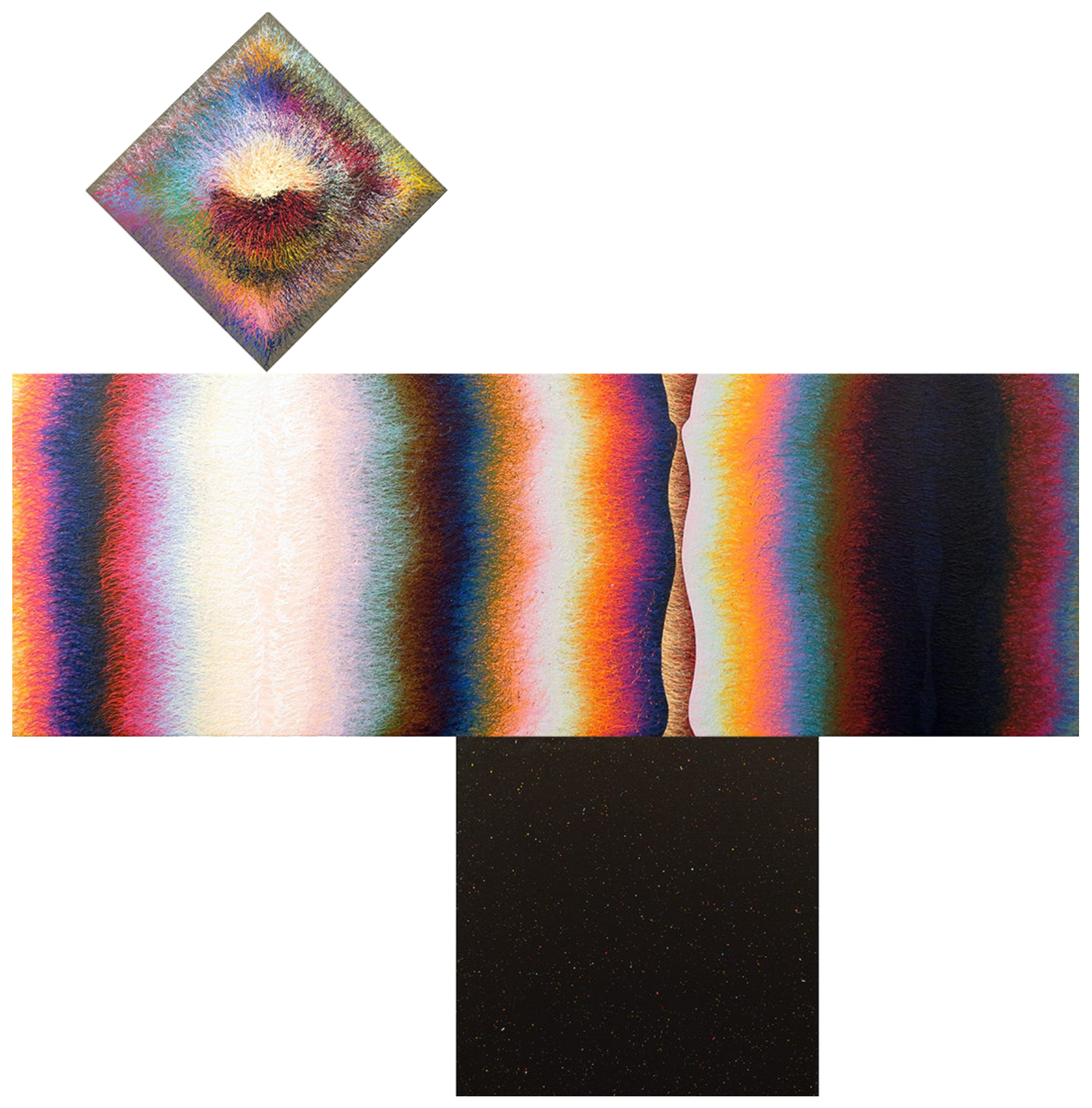 View work by Stephen Mauldin among the jury selected artists in “What is Abstract Art TODAY?” ’20/21 Juried Artists Virtual Exhibit Space 2 (VES2) below